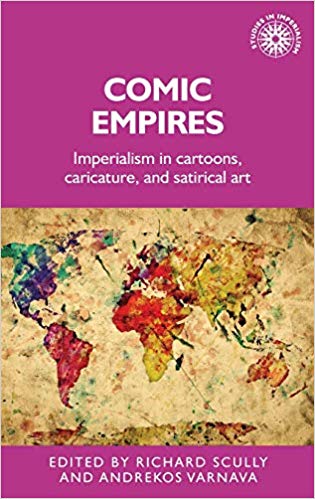 Comic empires is a unique collection of new research exploring the relationship between imperialism and cartoons, caricature, and satirical art. Edited by leading scholars across both fields, the volume provides new perspectives on well-known events, and also illuminates little-known players in the ‘great game’ of empire.

The volume contains a wealth of contributions from noted as well as emerging experts. Keren Zdafee and Stefanie Wichhart both examine Egypt (in the turbulent 1930s and during the Suez crisis, respectively); David Olds and Robert Phiddian explore the decolonisation of cartooning in Australia from the 1960s; Fiona Halloran, the foremost expert on Thomas Nast (1840-1902), examines his engagement with US westward expansion; the overseas imperialism of the United States is analysed by Albert D. Pionke and Frederick Whiting, as well as Stephen Tufnell; Shaoqian Zhang takes a close look at Chinese and Japanese propagandising during the conflict of 1937-45; and David Lockwood interrogates the attitudes of David Low (1891-1963) towards British India.

Some of the finest comic art of the period is deployed as evidence, and examined seriously – in its own right – for the first time. Readers will find cartoons on subjects as diverse as the Pacific, Cuba, and Cyprus, from Punch, Judge, and Puck. Egyptian, German, French, and Australian comic art also enriches this innovative collection.

Accessible to students of history at all levels, Comic empires is a major addition to the Studies in Imperialism series, as well as standing alone as an innovative and significant contribution to the ever-growing field of comics studies.